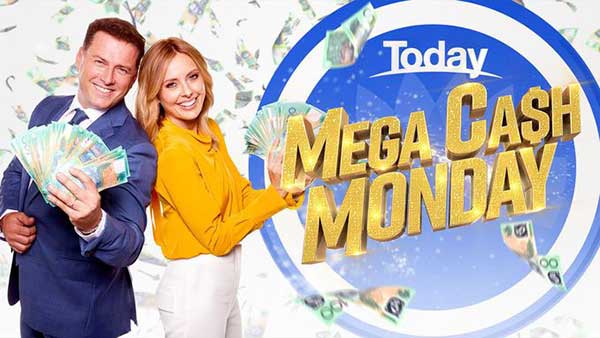 Every Monday you could Win $50,000 - Be watching the Today Show for the weekly code word! Each Monday, Today will be giving one lucky viewer the chance to win in our Mega Cash Monday. A weekly code word will be revealed during Today, which can be used to enter the running for the next Monday's call. You have a whole week to enter the competition and you can enter as many times as you like. To win, you must answer the call within THREE RINGS and say, "I wake up with Today." If you are called and answer within three rings and says "I wake up with Today," you can win a minimum of $50,000. If you answer the call incorrectly, the $50,000 jackpots to the following Monday. To enter: SMS your full name, the weekly code word and your full address to 199 55 901. Entry charge $0.55. Mercury Helpline 1300 914 815 OR Participants can use their smartphone to log on to enter9.tv/today. Weekly competition periods open and close at 23:59 AEDT Monday to Sunday. The weekly code word is valid until 05:29 AEDT the following Monday. Draw Dates: Mondays during the competition period at 00:10 AEDT. Total Prize Value: $350,000.00. Closes 29/3/20 at 23:59 AEDT.

Why can I no longer enter by calling the 1902 number?
Unfortunately, the infrastructure allowing 1902 phone calls has been discontinued by the Carrier who provides the phone lines and the service is no longer available in Australia. You can still enter via SMS (199 55 901) or smartphone.


NetRewards® - Copyright © 2021
NetRewards takes no responsibility for the running or outcome of the competitions, nor the information contained in the listing. All logos, trademarks, images and competition information have been quoted for illustration purposes only and remain the property of their respective owners. NetRewards® AppRewards® and the 'Dollars At' symbol are registered trademarks.